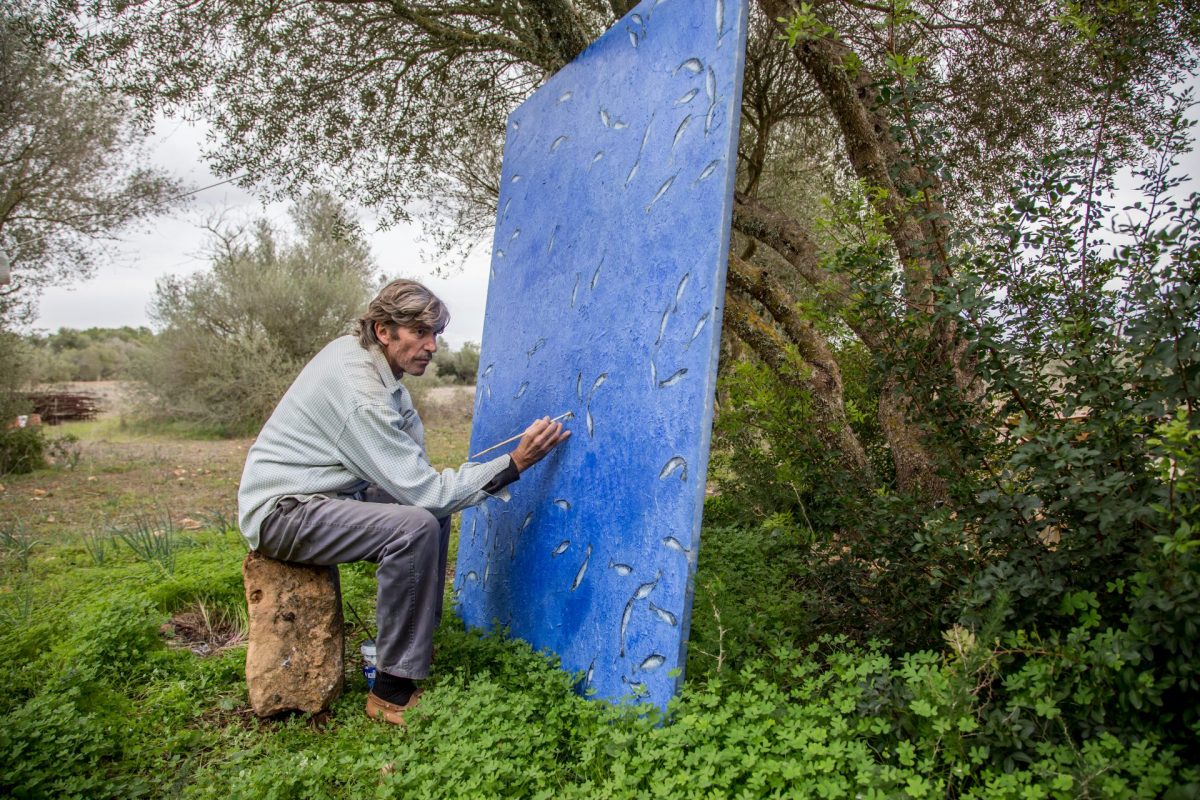 “So much has been destroyed by greed for money.” Pablo Bujosa, painter

He went bankrupt with his building company twice and had to let 25 employees go. Pablo Bujosa only became a painter at 43 on the advice of an astrologer, although he doesn’t believe in “that stuff” at all.

The nails catch my eye right away. Crooked, used nails on a picture that costs EUR 4,000 and – painted blue – represent seaweed on the sea bed. My eyes wander to a shrimp. “I make use of anything lying around in my oven.” Pablo Bujosa laughs. Impish, roguish, almost a little shy. 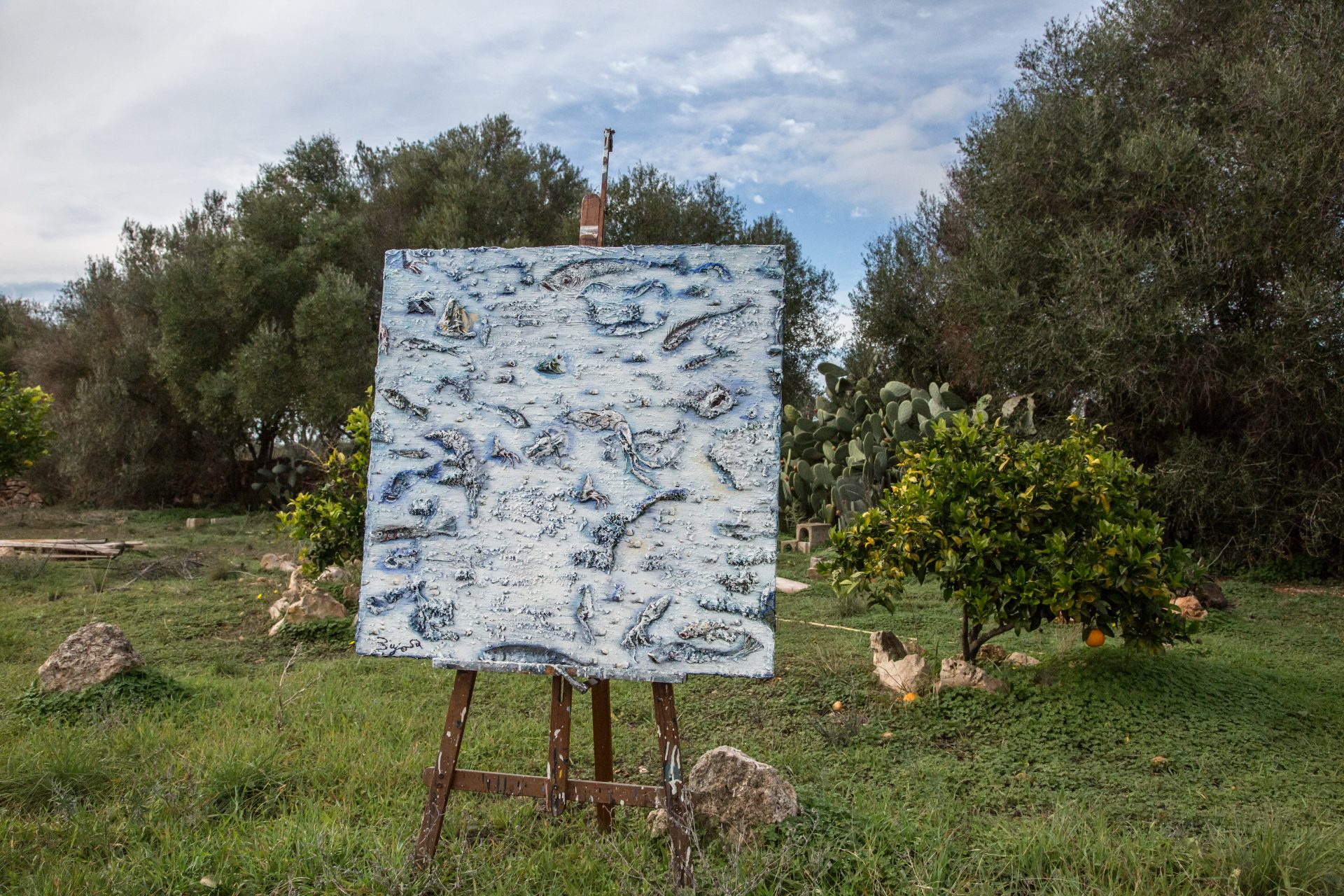 These are the little details that make his painting so extraordinary. Fish made out of toilet rolls, or fruit he creates from pieces of coal – also from his oven. 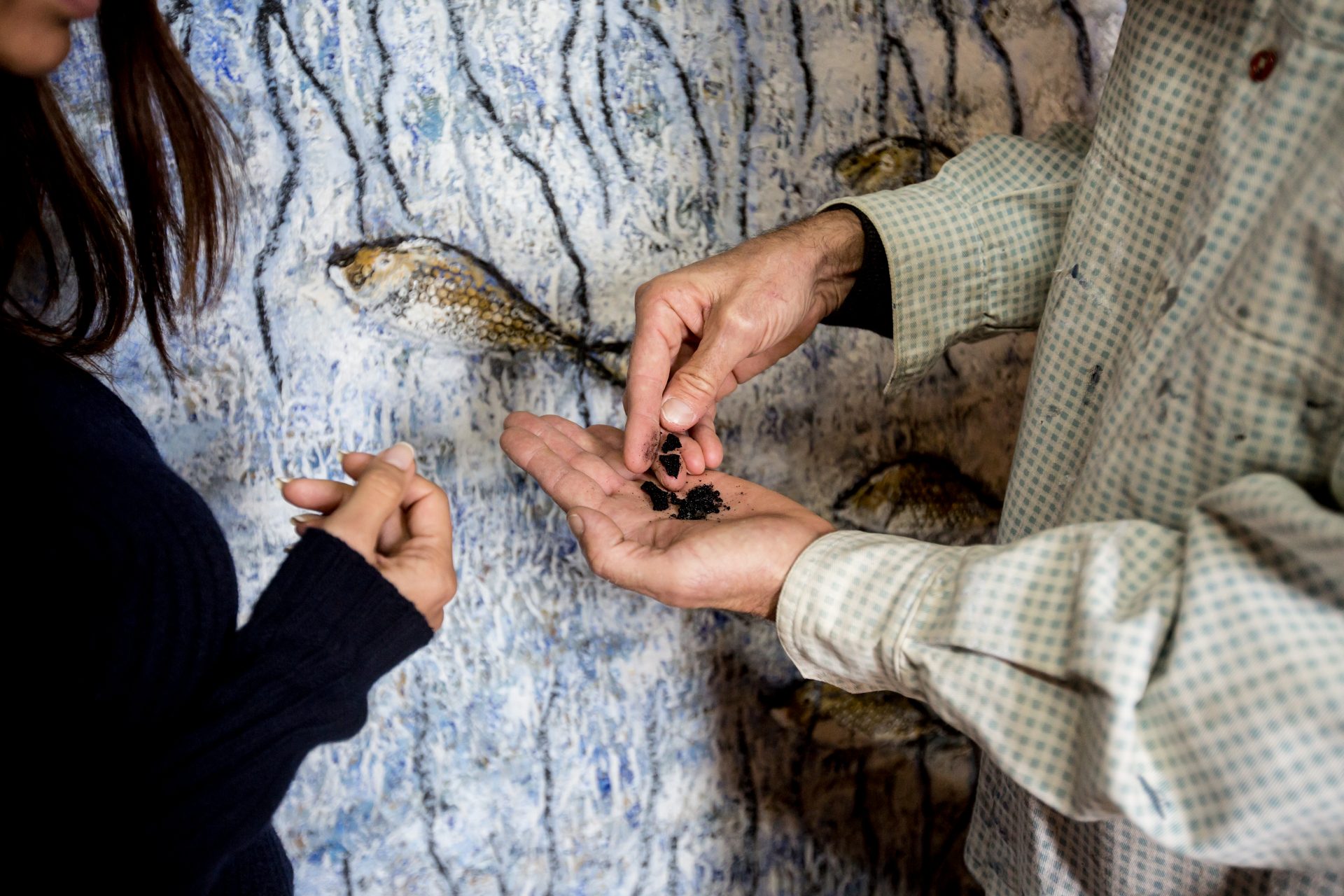 Pablo Bujosa is a genuine Mallorcan, island born and bred. We want to talk about the extreme transformation undergone by his homeland, which has gone from being a retreat for Spaniards to a hot spot for budget tourists over the past few decades. But that will come later. 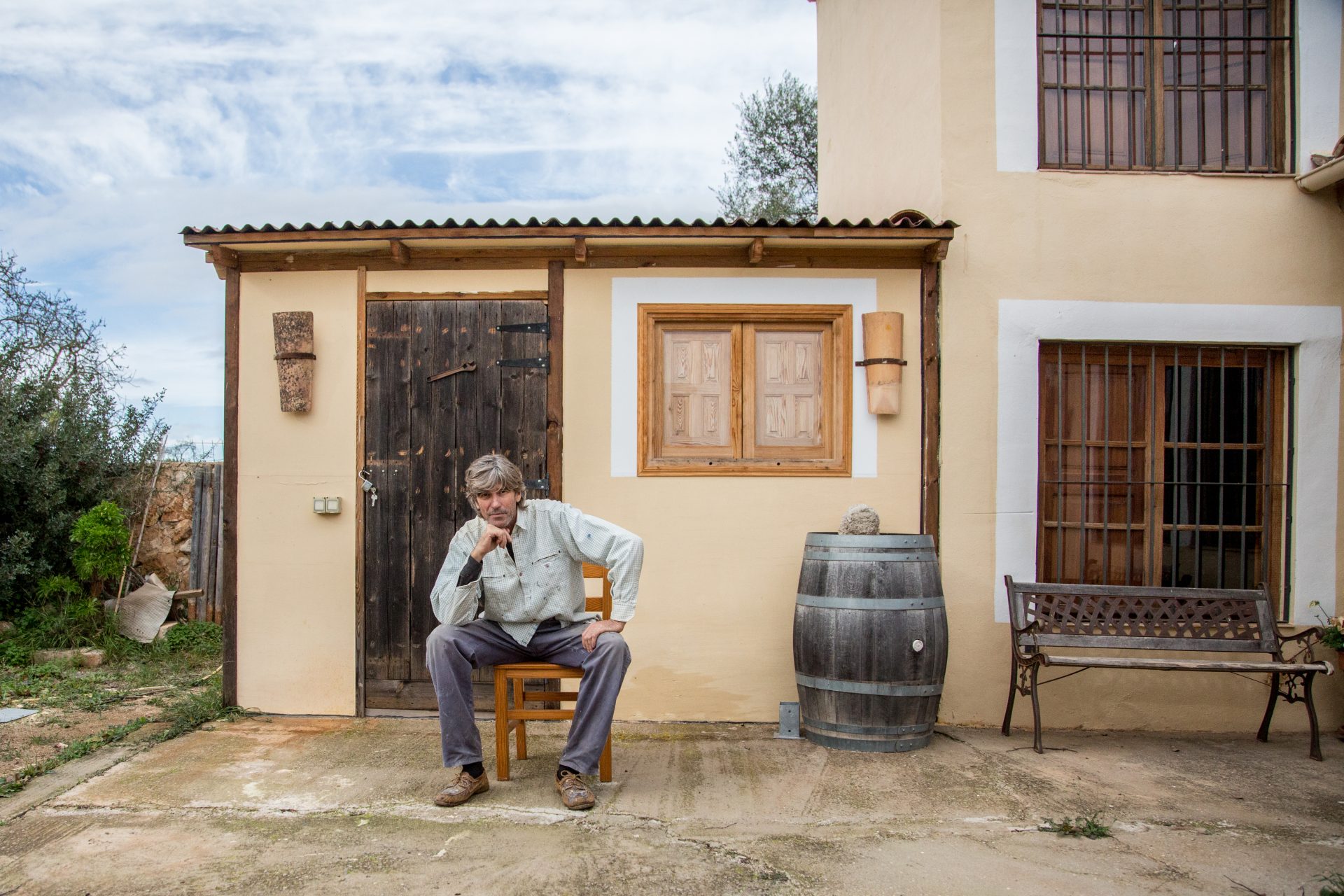 His studio is his home, is his garden. He paints wherever the urge takes him. And he paints whatever comes to mind. “I begin with an idea and when the picture is finished, it’s usually something completely different. If I’m not happy during the painting process, I take a sander and start again. My work is mainly improvisation.”

He spends one and a half to two months on a work of art. Usually, he works on a few at the same time. The canvases and wooden boards hang in his studio like hams lined up to dry. Bujosa laughs his quiet, throaty laugh again. He enjoys the comparison. 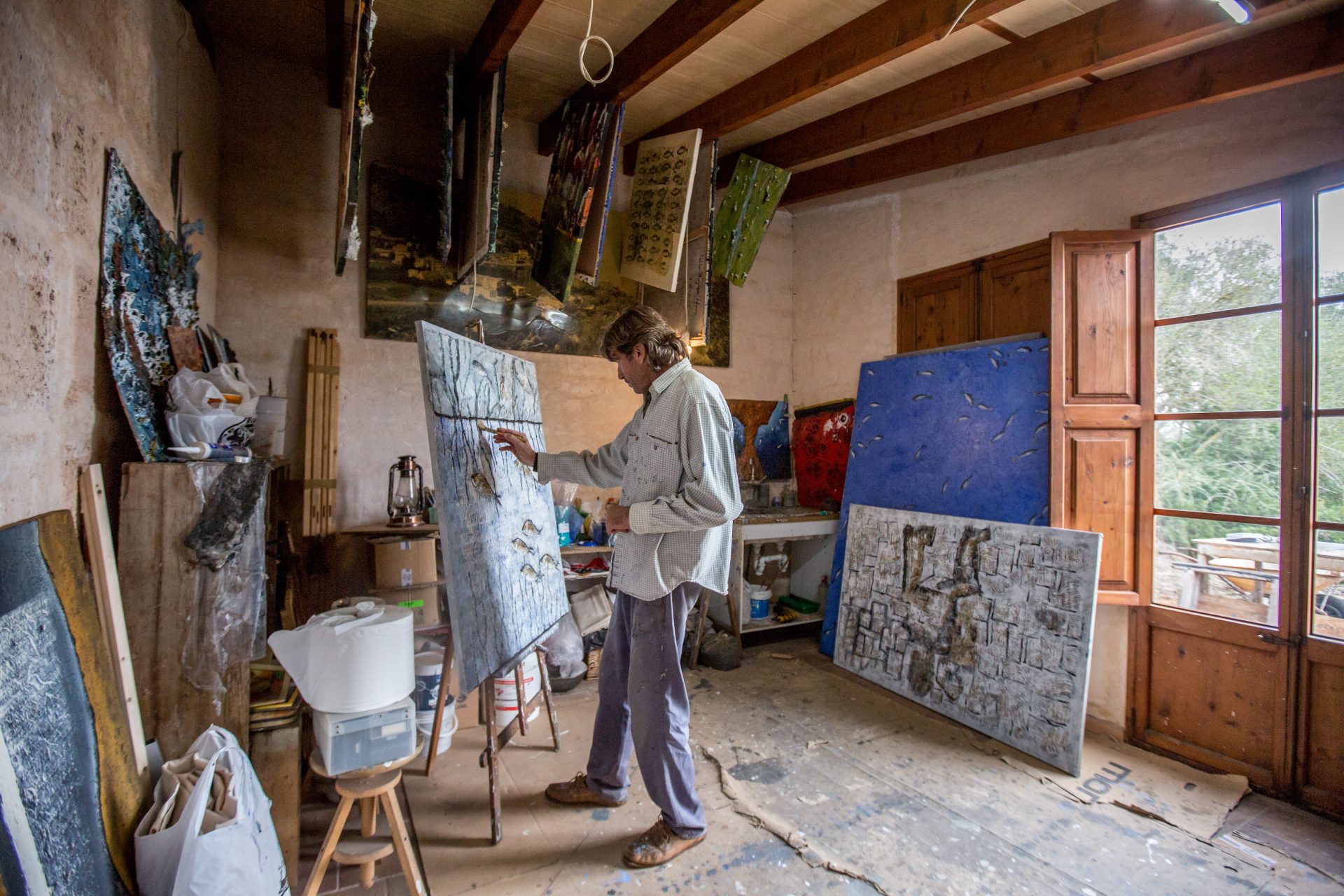 He sees himself as a craftsman. In fact, he once was one. For the first half of his career, he made a living with his building company. He built apartment complexes by the sea. “I had 25 people working for me. I went bankrupt in the big building crisis and had to let them all go. It was the second time.”

You can tell that this must have been a tough time for him personally. He speaks quietly, with the raspy voice of someone who has smoked for many years. Suddenly, he hesitates, and fixes me with a searching look. “Can I tell you something private? It’s a little crazy. But it’s true.”

In the midst of the crisis, Bujosa visited a friend in Madrid, a professional astrologer. In truth, astrology did nothing for Bujosa. But, as he had some time on his hands and was full of curiosity in this lost phase of his life, he asked his friend for advice.

He was convinced that Pablo Bujosa would become a painter. “I said: You’re crazy! I can’t paint. Just drop it.” Despite his initially irritable, defensive reaction, the words stuck with Bujosa, who was 43 at the time. It got him thinking.

Back in Mallorca, he took his eight-year-old son Marlon to his parents and told them that he was bringing the boy over because he had to paint. “You should have seen their faces!” At 56, Bujosa still has a roguish look when he describes this extraordinary period of his life, laughing. 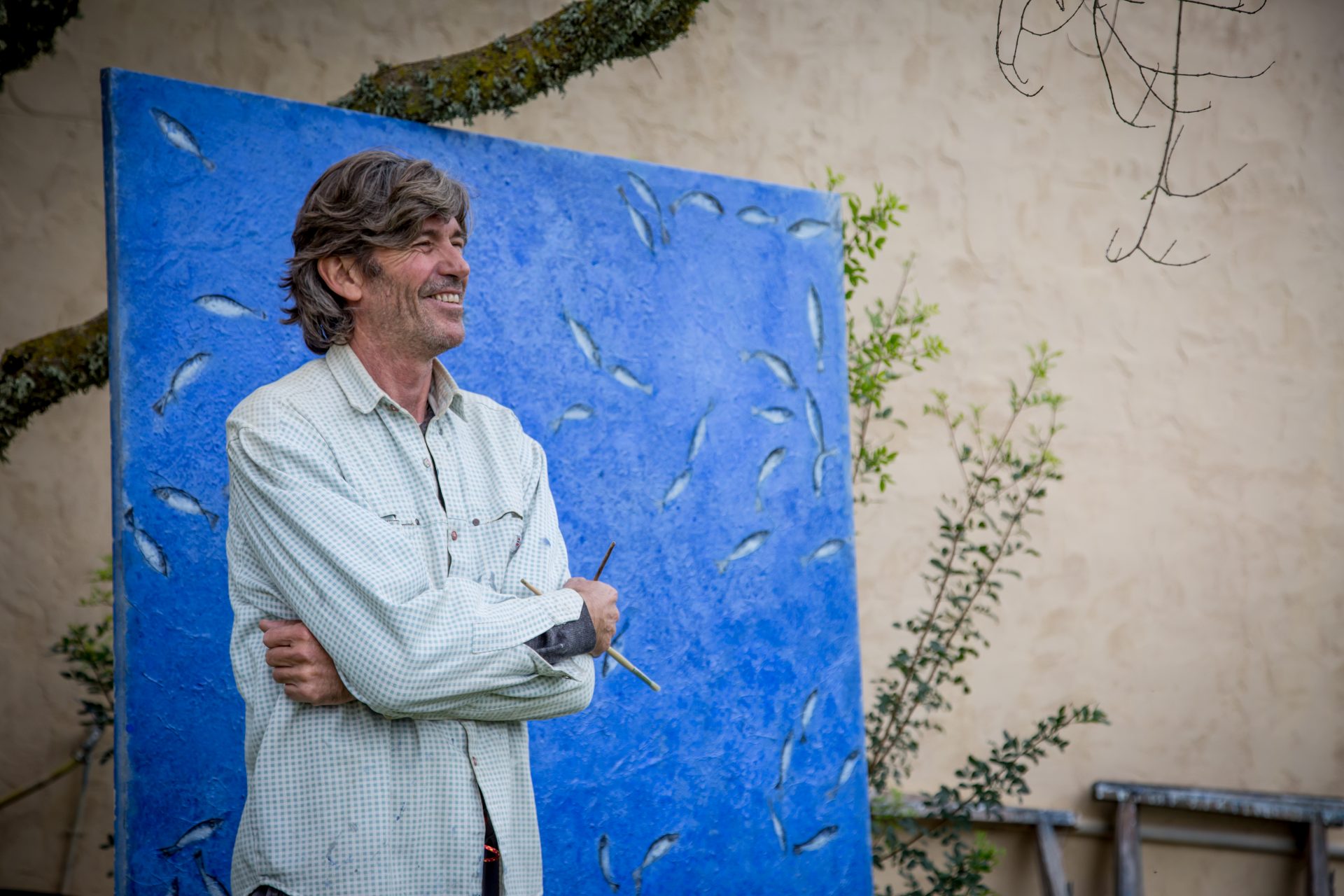 In two hours, Bujosa painted his first picture on a wooden board. He brought his work to lunch. He had never painted before. “I’m a practical person, and I just gave it a try.” Today, the painting still hangs in his parents’ apartment. 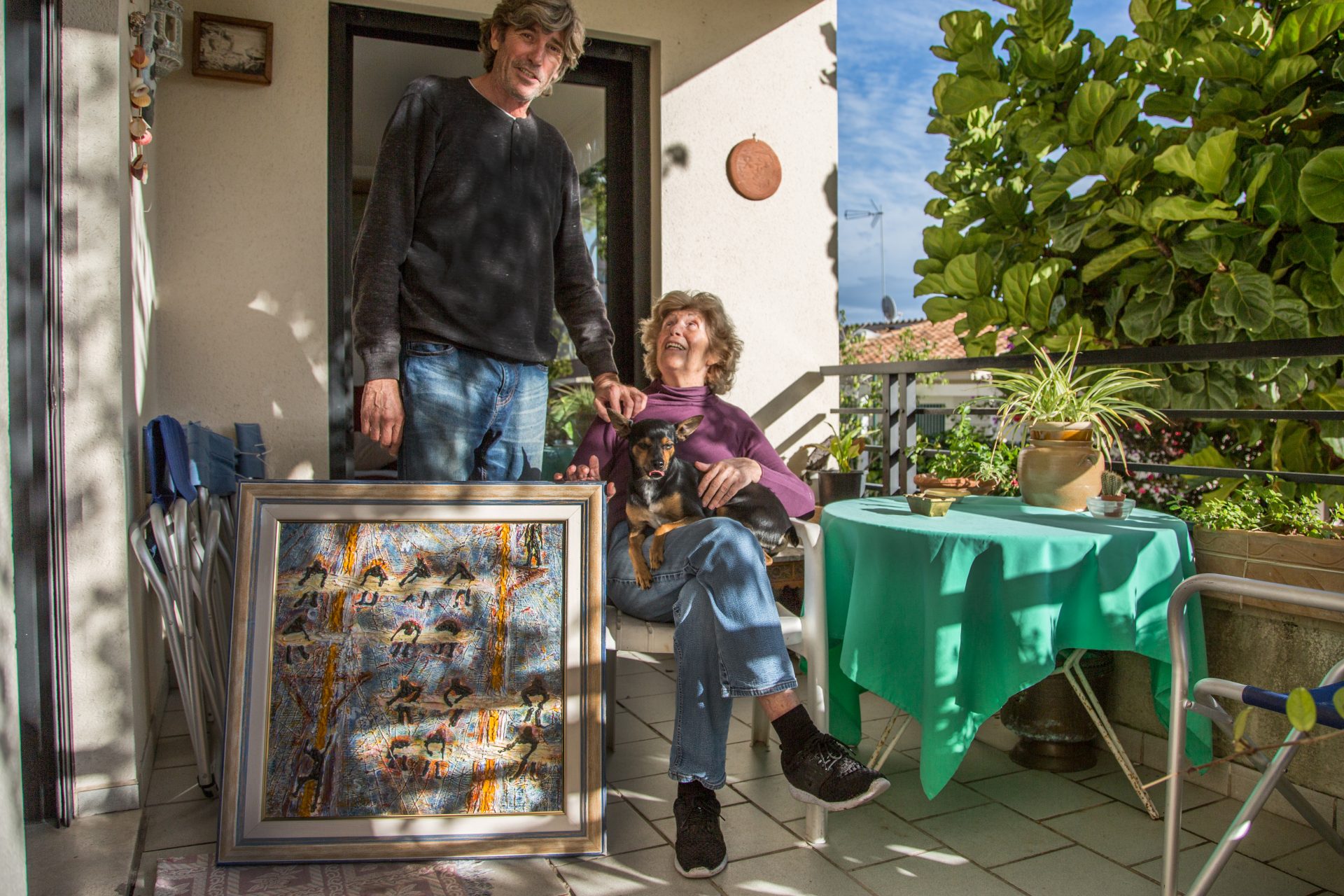 From the beginning, the fledgling painter found a gallery to exhibit his paintings. Today, his works, which all have the sea as their theme, are sold for several thousands of euros and hang in houses and villas, not just in Mallorca, but in England, Germany and Switzerland.

The contrast couldn’t be greater between the walls where the pictures hang and the completely isolated place where they are created.

Bujosa, who spent the first decade of his life growing up in the capital city of Palma with his six siblings, moved with his family as a teenager to the port town of Portals Nous, where fancy houses and villas sprung up like mushrooms from the ground many years later. ‘Back then, in Portals Nous, there was just a bar and a supermarket. Half the houses weren’t even built. There weren’t all the roads and motorways.’

Property became unaffordable. Many Mallorcans withdrew and left the place to wealthy foreigners. Bujosa moved away to the heart of the country. His kingdom: 16,000 square meters, olive trees, a couple of old stone walls, fields, and forest – so far away from everything that the journey there feels like an adventure. 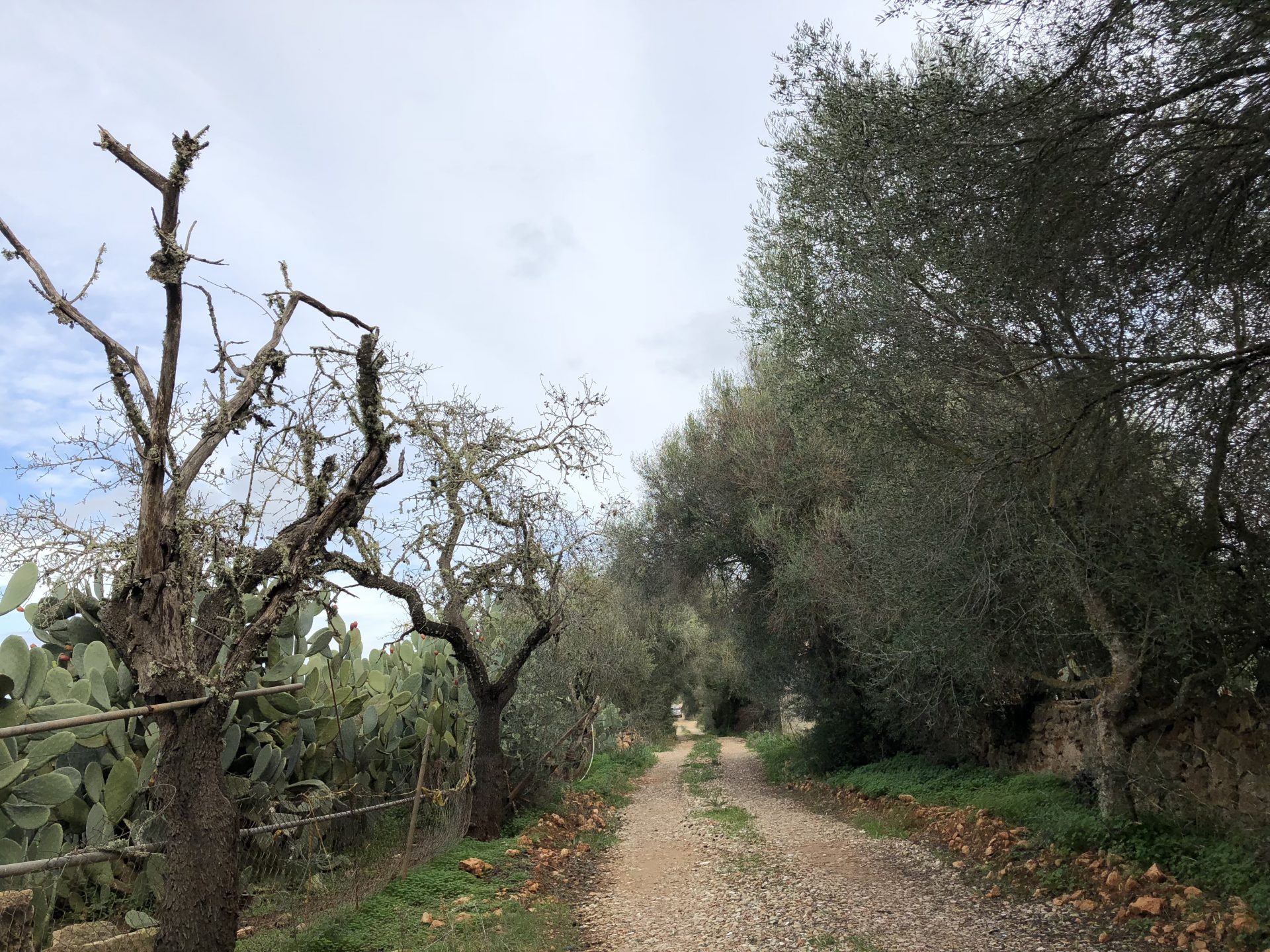 Does he feel as if he was driven out? “No, not at all. I left of my own accord. I wasn’t driven out. The problem isn’t the residents, either, but the budget tourists. All they do is take, give the place a bad image, and don’t give anything back.” 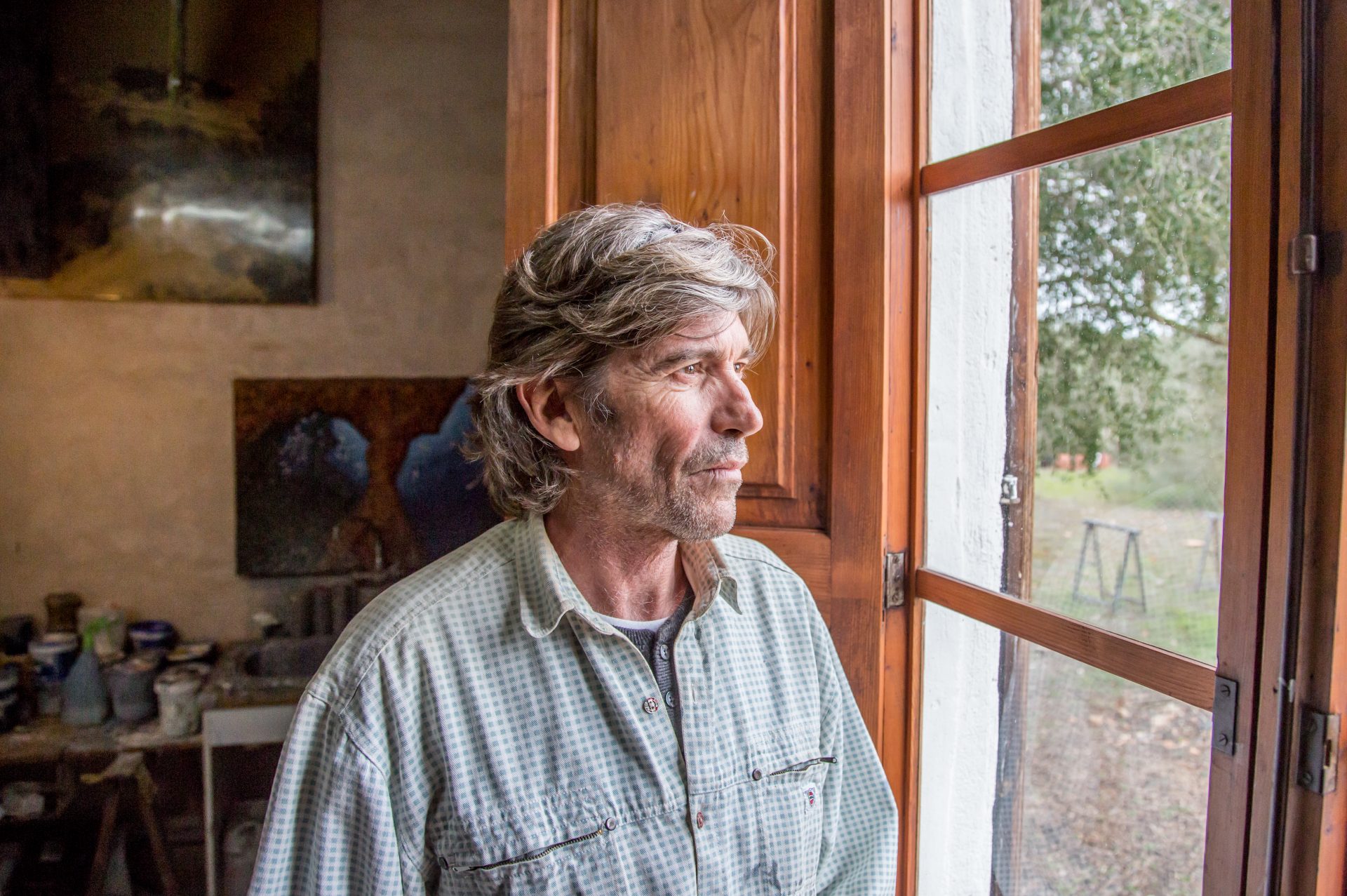 Although he has seen the changes to his homeland up close, and perhaps also how the original charm of the island has largely been lost, or at very least altered, he doesn’t want to join in the lament. “There’s been a tourism boom in Mallorca for 50 years. There have always been lovely big houses and villas here. Before tourists came from all over the world, the Spanish came from Madrid and the mainland on their honeymoons. Even the king still comes here on holiday. They’ve all shaped Mallorca the way it is today. But many local people were greedy for money. And that’s the result.”

By “that,” he means, first and foremost, all the eyesores. “On the beaches, hotels sprung up everywhere. A paradise was destroyed. Imagine how the island would look if the hotel complexes weren’t standing there on the beach. But in the short-term, the politicians saw mostly money in this investment. El Arenal was a copy of Es Trenc, the island’s most beautiful beach. There you can see what happens when people build right on the sea.”

Today, El Arenal is mostly known for the Ballermann, German-speaking tourists’ very own pleasure strip. But reducing the island to this would be doing it a disservice. That isn’t news to those who live here, and those who don’t just go from the airport straight to the Ballermann and back.

The Balearic island is a magnet. Its mild climate lasting virtually all year round, insanely beautiful nature, great food, and Mediterranean lifestyle drew 15 million tourists last summer. There’s a note of wistfulness about the artist as he speaks, but also a large dose of pragmatism. “Life is moving on. I’m very open to that. In my case, the tourists also bring commissions and work.”

Seeing the countless canvases hanging around the place, inside and outside, it’s clear that Bujosa’s talent, discovered somewhat reluctantly, is one which appeals to many. For him, that’s also the greatest reward, when he can bring someone joy with his paintings. “Although it’s comforting to be able to make a living from my passion, the money isn’t my favorite thing about making a sale. It’s noticing that someone appreciates what I do and can see the work that goes into every painting. I often paint in several layers. Then I need to wait for up to a few days for the paint to dry.” 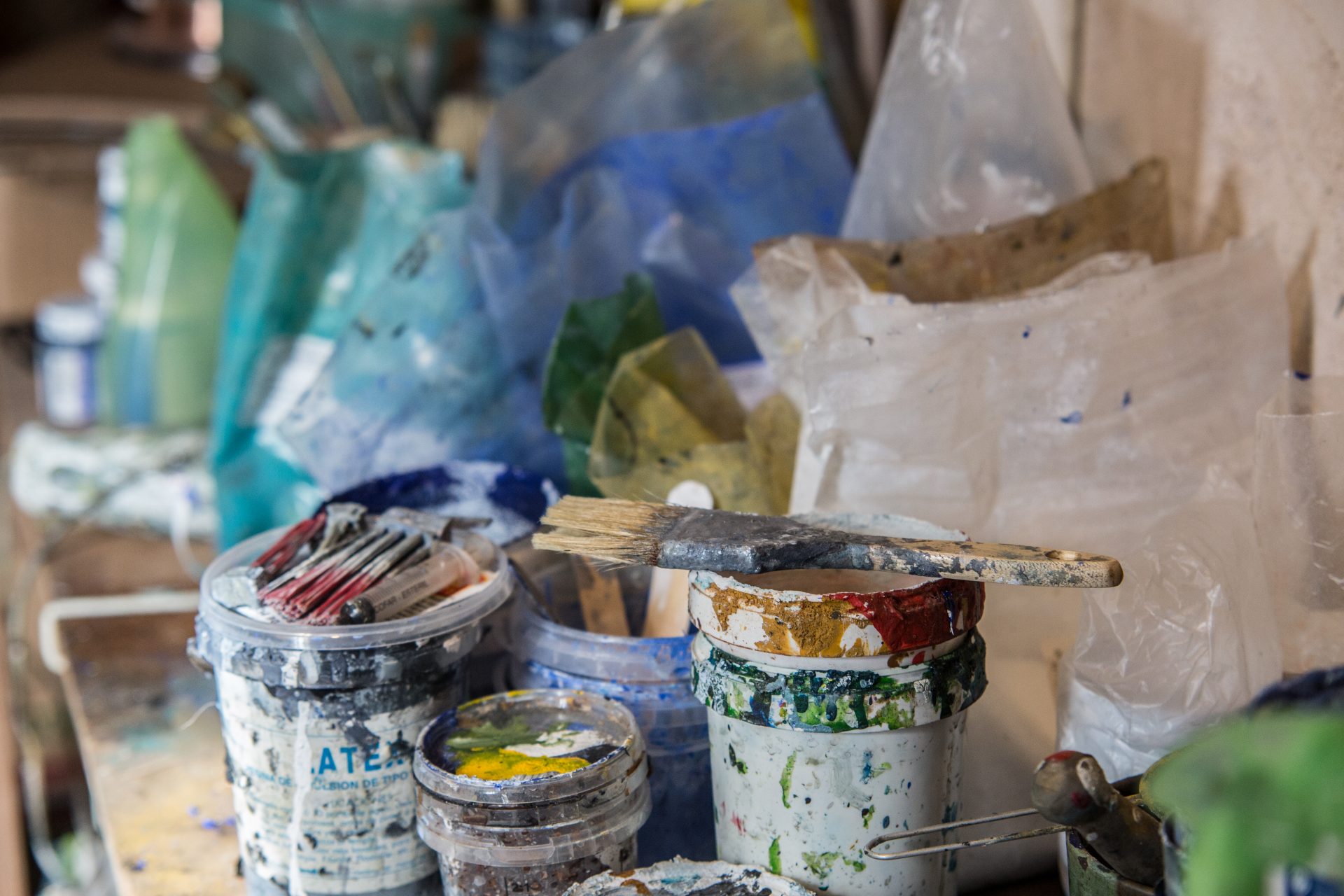 He seems to be someone who has found their life’s passion. The ideas, says Bujosa, just buzz around in his head like that. But he would probably never be able to turn all of his ideas into pictures.

Does he ever think about stopping? He says: “I don’t know exactly where I’m at in life. It feels like a transitional phase.” Why doesn’t he ask his friend the astrologer again? “He’s in Peru. At Machu Picchu. But he’s already shown me my calling. He’s done his duty.”

What is it that he wants, then? “Hombre, I want to become a good painter,” he says, laughing his contagious laugh again. 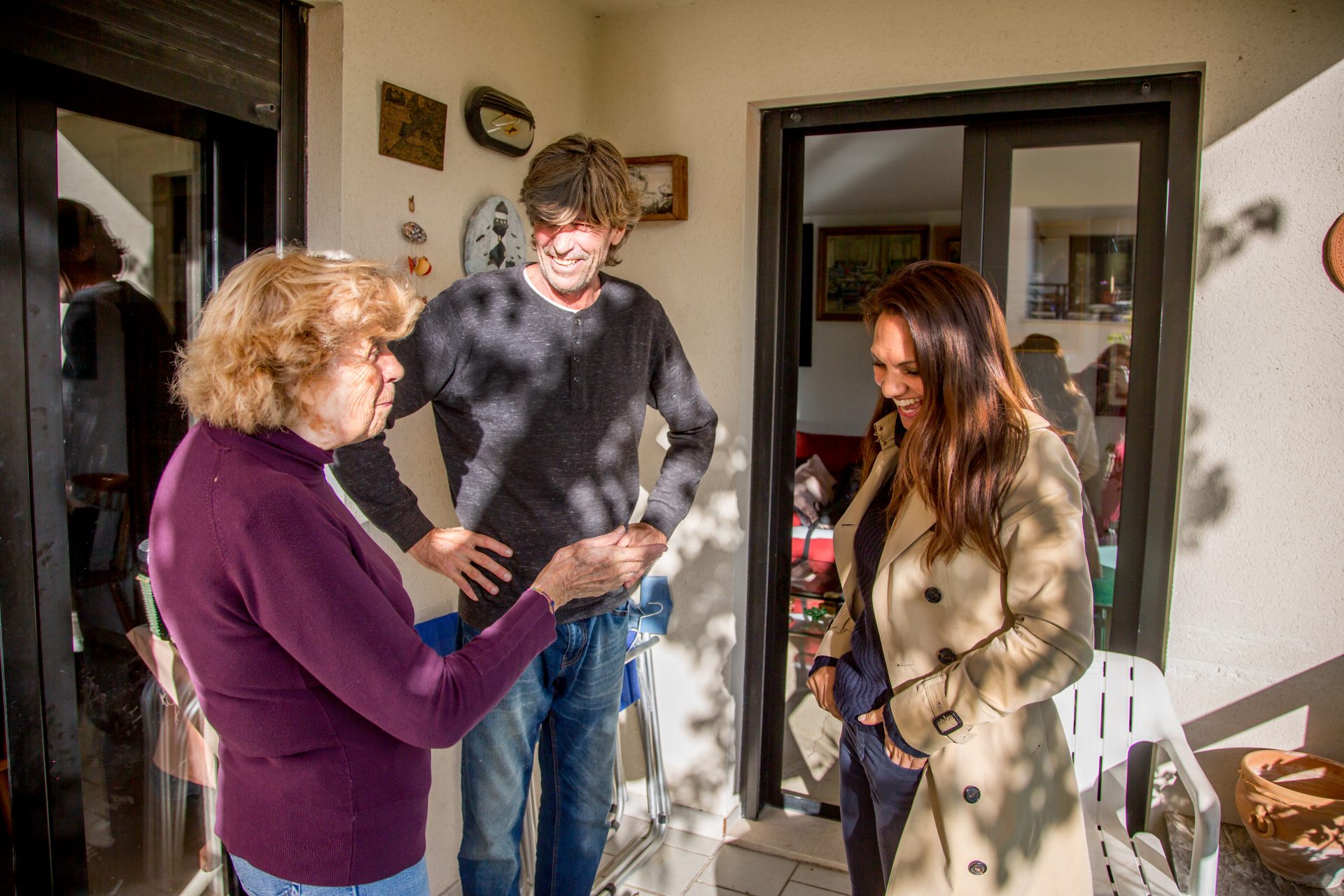 “And suddenly, I was scared to death.” Marco Büchel, 47, former ski racer 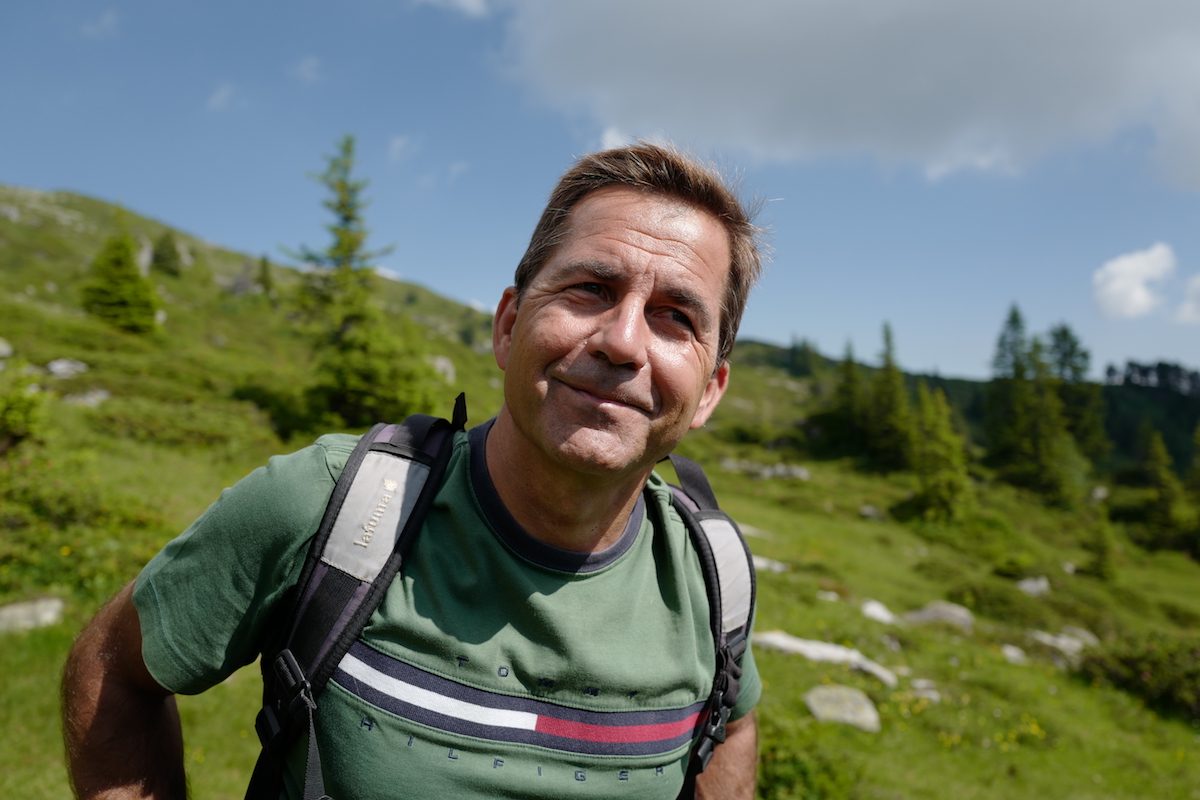 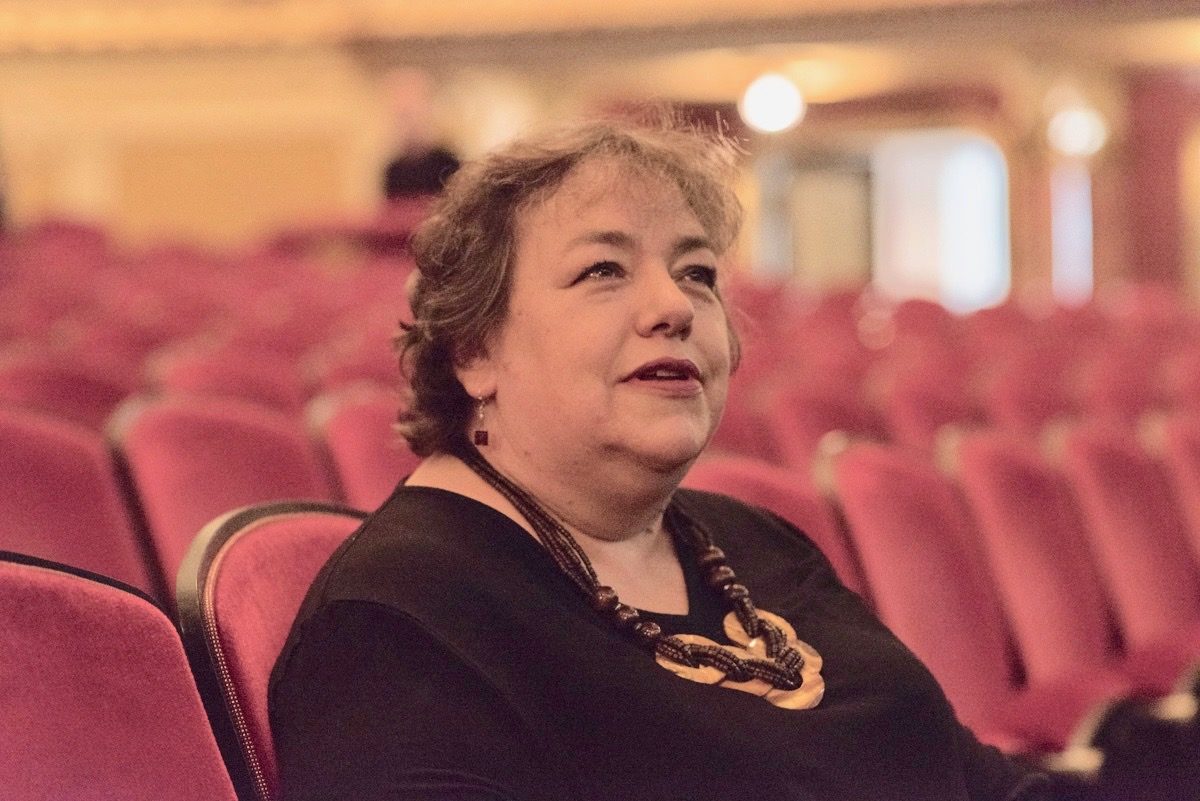